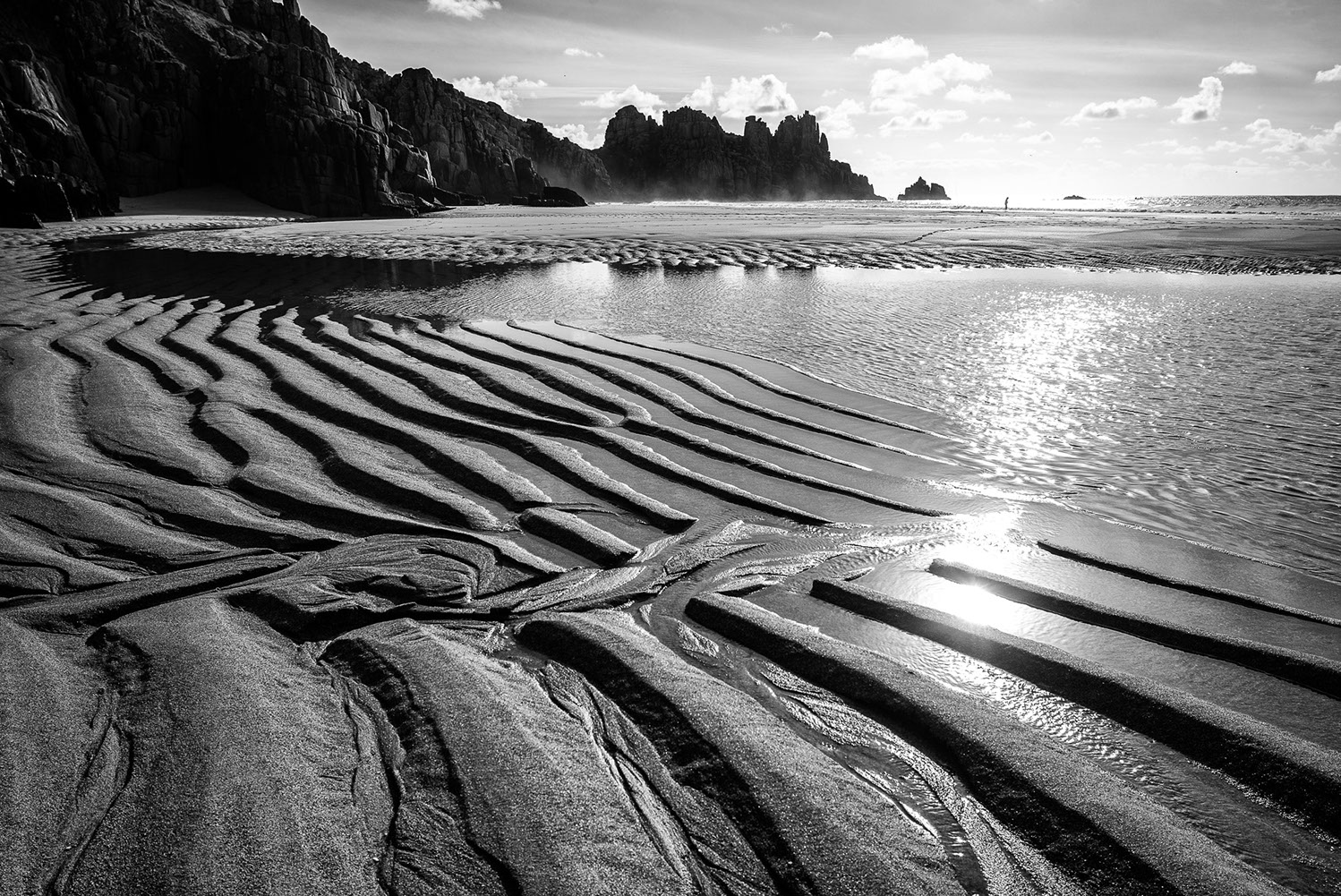 Leica quietly introduced new versions of three of their most popular lenses earlier this year:

All three lenses have Leica's improved, screw in lens hoods.

I tested all three of the new lenses in Autumn 2015, culminating in a big comparative test in Venice between the new and old lenses on three different cameras (a Leica M(240), a Sony A7 mark ii and the Leica SL).

The results were pretty clear; the new 28mm lenses showing obvious advantages over the older lenses, however, these were prototype lenses, so it wasn't reasonable to publish images from them.

In the meantime Sean Reid has written an excellent article about the lenses on the M240 and the SL at reidreviews.com with a field report as well as his thorough studio tests.

I used the previous 28 Summicron for several years, only selling it on the introduction of the peerless 28 Summilux Asph. The Summilux however is a comparatively large and heavy lens and I was so impressed with the prototype lenses that I have recently bought one of the new 28 Summicrons, especially for travelling light.

Judging by the Internet discussions and my email correspondence it seems to me that the improvements with these lenses are not very well understood, so it occurred to me that it might be worth doing a comparative test. A trip to Le Marche in Italy to meet up with Vieri Bottazini seemed like an excellent opportunity to take some infinity shots in the clear Appenine air.

Ivor Cooper at Red Dot Cameras in London (reddotcameras.co.uk) was kind enough to lend me one of the older 28 Summicron lenses and my son Silas handed over his Sony A7 mark ii for the weekend.

It would have been nice to have had the f2.8 Elmarits for the test, but in the end it proved too complicated to get hold of the lenses in the short timescale. My previous tests in Venice had shown me that the improvements were pretty equivalent, so it still seemed worthwhile testing the 28 Summicron alone. 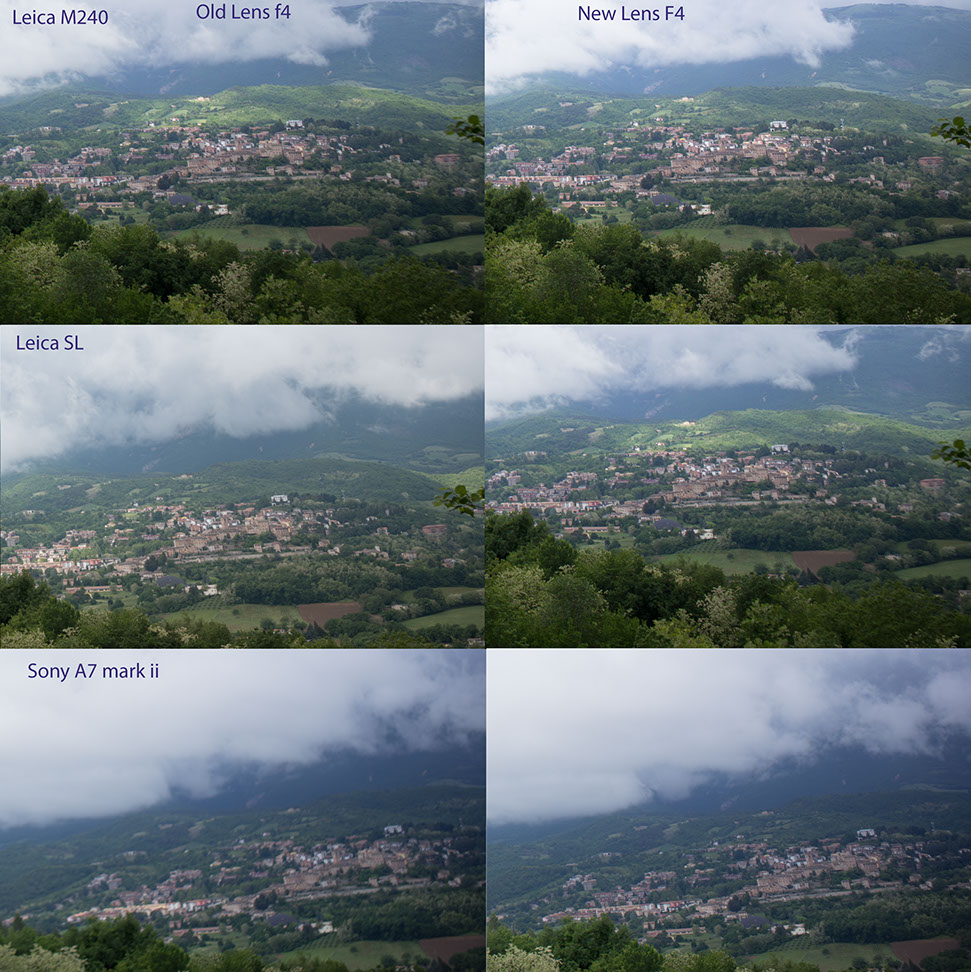 This lens has been a favourite for Leica shooters since its introduction in 2000, whilst being perfectly sharp it has a gentler rendition than most high quality wide angle lenses. It is loved by Reportage, Street and Landscape shooters alike.

However, it is one of the most demanding lenses when used on 3rd party cameras, especially full frame cameras such as the Sony A7 range and of course the Leica SL. The rear exit pupil is very close to the 'film' plane, creating a sharp angle of incidence to the sensor; this is not nearly so critical with the film cameras for which the original lens was designed, but the cover glass thickness and photosite microlens design on digital cameras can cause real problems in terms of soft corners and colour shift across the frame.

The special microlens design on the M240 sensor together with firmware profiles and the relatively thin coverglass has helped to make the lens a fine performer. The Leica SL also includes firmware correction for the lens, nevertheless, it's one of the few M lenses which performs better on the M240. On the Sony A7 cameras (in my opinion) it's been one of the no-go lenses.

All three of the new lenses incorporate the use of the modern style screw in metal lens hood. This is a great improvement, the old lens hoods were large and unwieldy with a metal connection which could easily scratch the lens barrel, worse than this, they tended to drop off easily.

Apart from this, looking from the outside, the difference between the older 28 lenses and their replacements is not very obvious, however, the optical formula has been radically improved, especially for use with digital cameras. The lenses have had the curvature of field reduced (making corners and edges sharper at wide aperture), and the 28 Summicron has had its MTF figures improved.

The 35mm Summicron has not had its optical formula changed, however, it does have two more aperture blades which creates a rounder aperture opening and should improve the bokeh (except when wide open of course). 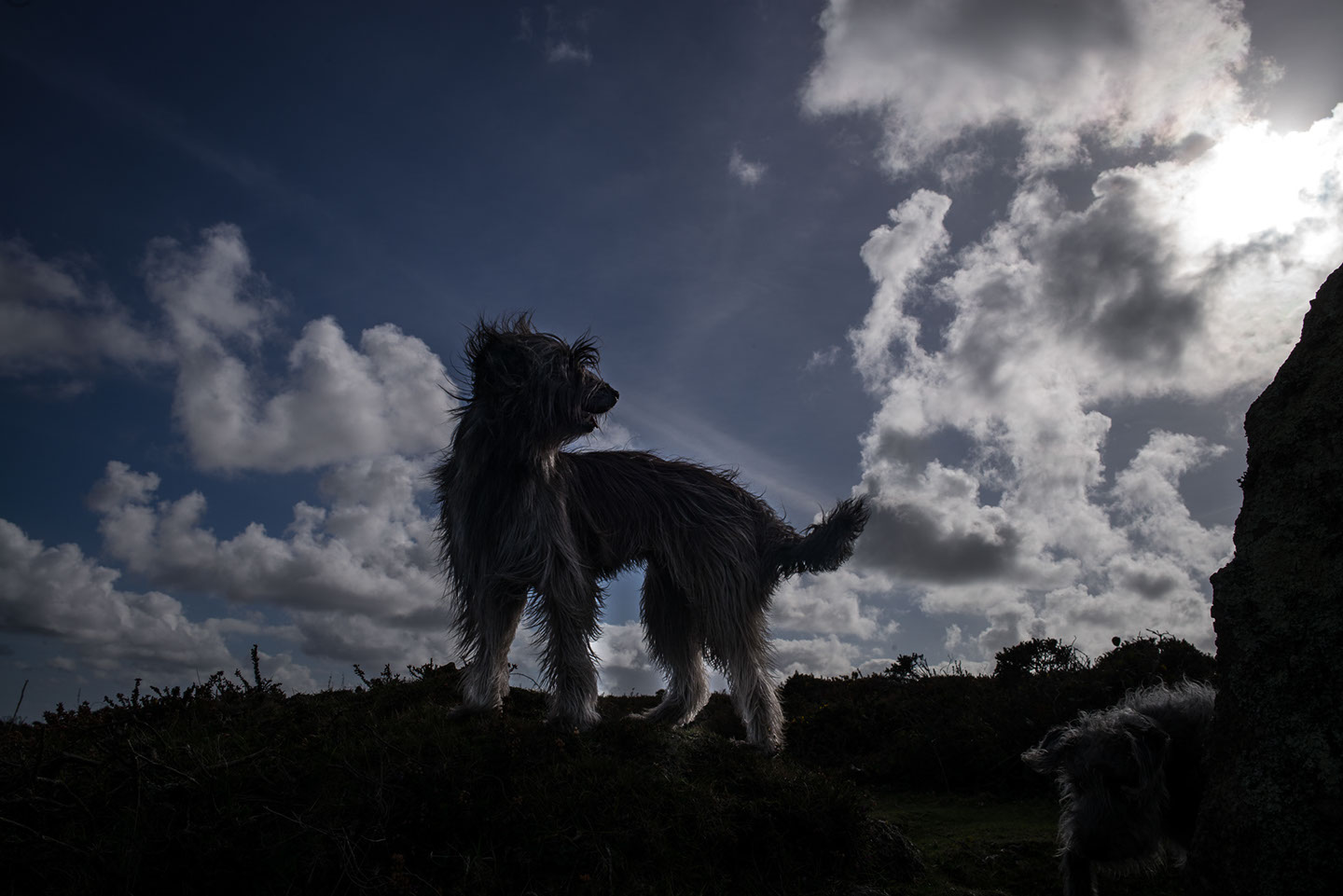 The rear element of M lenses is closest to the sensor at infinity, so it's best to test these lenses as close to infinity as possible, which is not always such an easy task, in particular as air conditions (and especially heat haze) can seriously affect the results.

I have also included some shots of an old shed, these were taken in the UK from about 4 metres. It was interesting doing these tests, as it made it very clear to me how great the curvature of field is on the older lens (not something I had realised in normal shooting . . I just knew that if you focused using the rangefinder you got soft corners!).

Whilst the infinity stop on Leica rangefinder cameras usually closely matches infinity on the lenses, this isn't usually the case on mirrorless cameras which will often focus beyond infinity, so it's important to do focus bracketing to ensure the best possible focus in each case.

Exposure is also fairly tricky, principally at wide aperture where vignetting is an issue, and especially with the Sony camera, which doesn't have profiles for M lenses. There might be an argument for doing a comparison with the lens profiles turned off on the Leica cameras, but although the results would be interesting, they wouldn't represent real world usage.

I have included the Sony because many Sony users shoot with M lenses, some even going so far as to modify the Sony sensor to reduce the thickness of the coverglass. This report is not intended as any kind of criticism of Sony, who produce excellent and exciting cameras, and who couldn't be expected to optimise them for the use of Leica lenses - especially in the light of their relationship with Zeiss. . .  It is intended to be of use to those Leica lens owners who are considering (or already) using M lenses with a Sony A7.

The three cameras I've used are currently the only cameras which shoot full frame digital images with M lenses and whilst there are various models of both the A7 and Leica M cameras, the critical coverglass thickness and microlens design is not changed between models in their respective ranges.

As I've mentioned above,  the 28mm Summicron is probably the most challenging of the current Leica M lenses for digital cameras. Many of the more modern wide angle designs such as the Summilux wides (21, 24 and 28) are less critical, and the Wide Angle Tri Elmar produce better results. 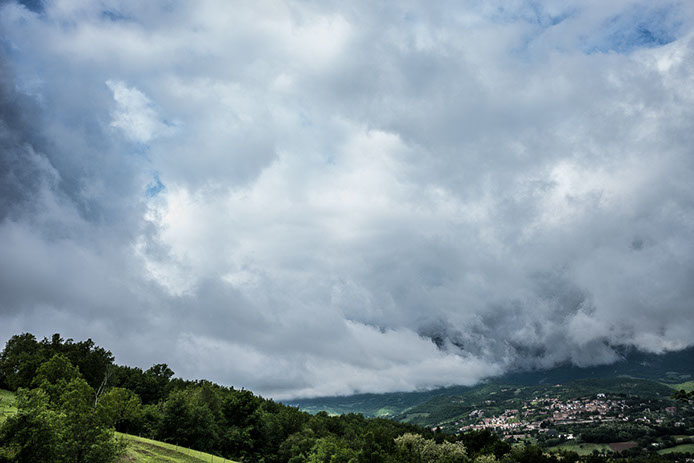 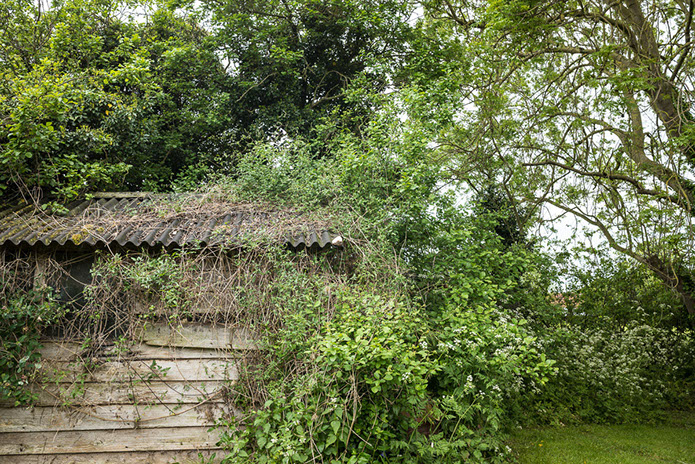 Sadly the lighting in Le Marche was not what one might have wished, but it was fairly consistent. The 4 metre shots were taken on a drab grey UK day, not so good for beauty, but quite useful for consistency.

I have adjusted exposure, especially necessary as the Sony had much more vignetting (it doesn’t have lens profiles). The idea of the test was to compare resolution and quality, not the vignetting, so I’ve done my best to equalise the lighting.

I’ve taken the same proportion of each corner for the images, of course it also shows the edge definition - not quite to the middle of the frame, but getting close to it. The group jpg shots are made in Photoshop and saved at full resolution. You can click on each image to see the full sized image (and download it if you wish).

You can download a zip file of the different images Here 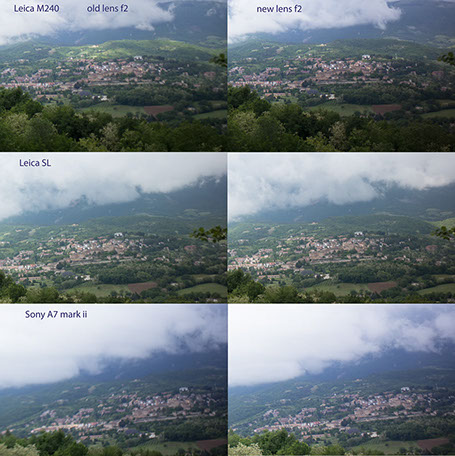 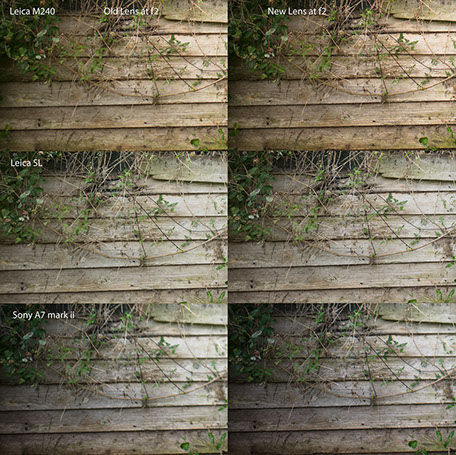 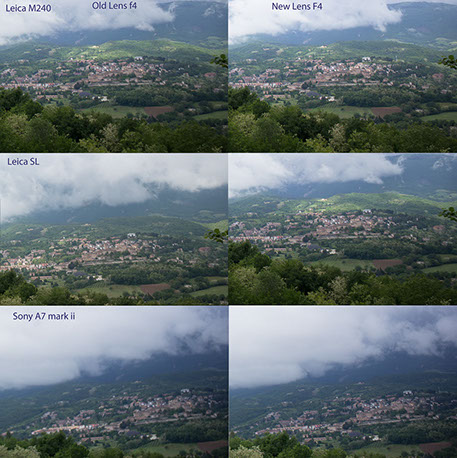 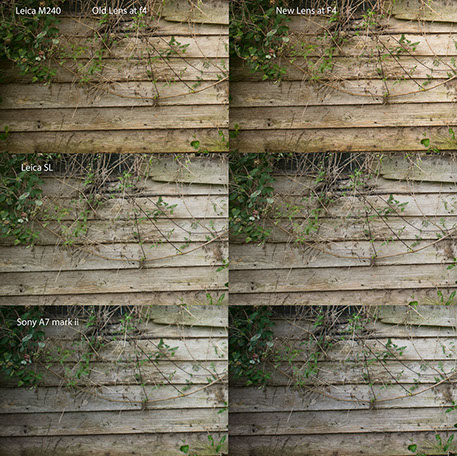 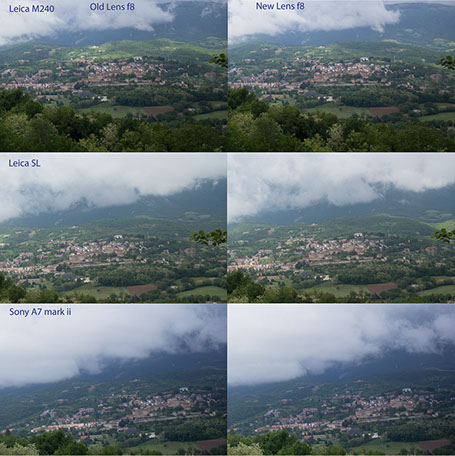 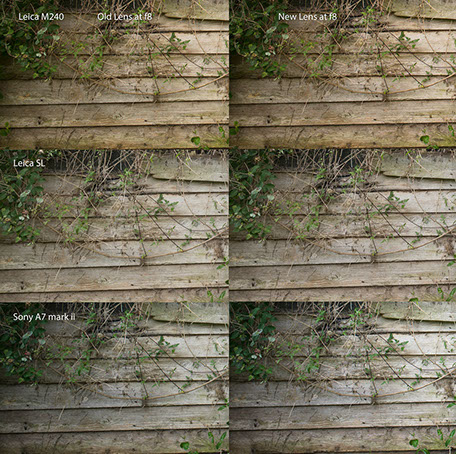 Pretty straightforward really. The new 28 Summicron shows considerable improvement over the old model, especially wide open, and especially with the Leica SL and the the Sony A7 mkii. The M240 also shows a noticeable improvement, but it’s micro-lens design and the thin sensor accommodate the older lens better, so the improvement isn’t nearly so obvious.

I think it also shows that if you want to use this (and other) M lenses for landscape work, then the SL does a much better job than the Sony, but if you want the very best performance, then the Leica M is still the best camera to use with M lenses. 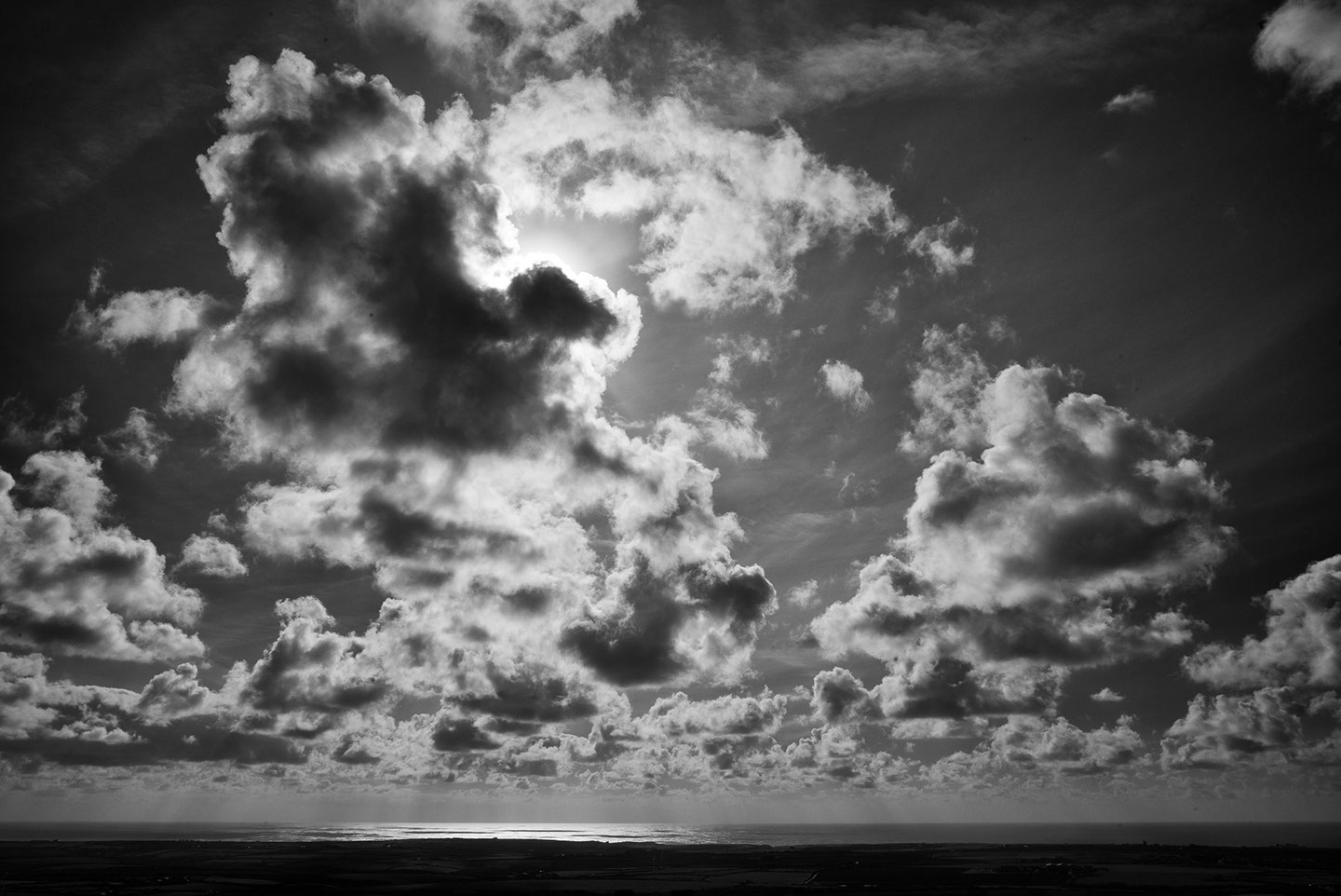